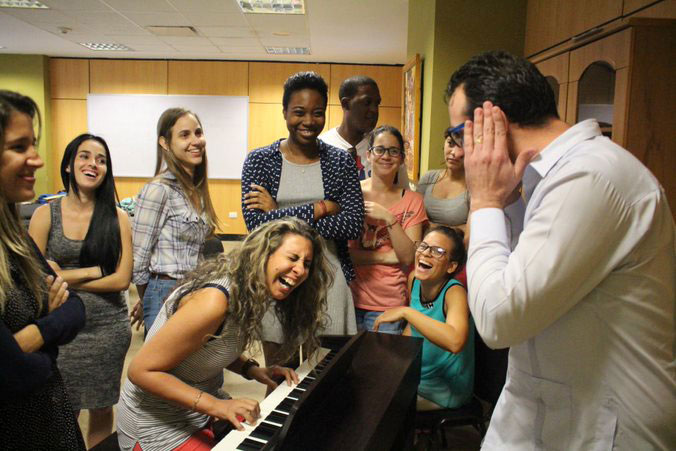 CuE stands for cross-border transatlantic cultural exchange, for cooperation and youth development, for give and take, for hospitality, sustainability and continuity in education. Making music together sets impulses: the rehearsed works present the musical culture of the participants, the interplay promotes listening, acceptance, sensitivity and openness.

“For your long-standing and successful commitment to the cultural exchange between Cuba and Europe, I thank you. The project is not only an enrichment for the participating musicians and the audience, but also for the bilateral relations between Germany and Cuba, which can build on the trust and networks created.”
Heiko Maas, Federal Minister of Foreign Affairs and patron of CuE.

The colla parte foundation supports the projects of the Cuban-European Youth Academy in Cuba. Current projects include regular master classes and a post-graduate course of study.

The master classes are open to all musicians and form the foundation of the work. In individual lessons, even the young Cuban musicians are taught according to the idea of the Balthasar Neumann ensembles. This means that the interplay of all arts and also the historical-sociocultural environment of each composer are considered. In addition to individual lessons, the emphasis is on ensemble playing in various formations such as string quartets, wind quintets or even in chamber orchestras. Master classes are held periodically at the music faculty of the Instituto Superior de Arte (ISA) or at the Lyceum Mozartiano de La Habana.

Since 2017, the postgraduate program of the Cuban-European Youth Academy, in cooperation with various Cuban educational institutions, offers the opportunity for further education in their own country. In addition to individual lessons and chamber music with the instructors of the Balthasar Neumann Ensemble, theory lessons and courses on performance and mental training complement the program.

CuE also regularly hosts orchestra and exchange projects on both sides of the Atlantic. Half of the participants come from Cuba and half from Europe, and the programs always include Cuban works of the time. In addition, formats for communicating contemporary Cuban musical culture are integrated into these projects.
Several project weeks are planned for 2021 as part of the Cuban-European Youth Academy in Havana. The dates will be announced shortly.